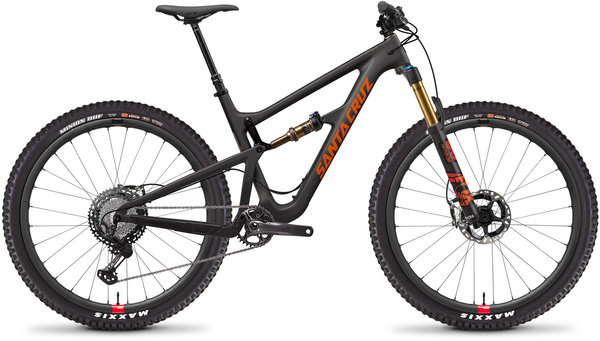 The Santa Cruz Hightower brings versatility and brawn to the game while hitting a sweet spot for aggressive trail riding. It sports 135mm of rear travel, fast-rolling 29er wheels, and a 67-degree head angle. The Hightower gives you the extra bit of confidence to let off the brakes and let 'er rip through the rough stuff. It feels well-balanced in the air and corners like a champ. At the same time, it is has impeccable trail manners and pedals efficiently, so you won’t get that ‘too much bike’ feeling if you end up doing an extra lap or pushing your ride further into the hills.

The XTR build makes no compromises. Its carbon CC frame is of the same pedigree that proved carbon’s place in the world of mountain biking, and the Santa Cruz Reserve wheels carry that torch even further, often called the strongest carbon wheels on the market. 135mm of rear wheel travel keeps the Hightower immensely capable, yet nimble enough to explore all day long, as Fox turns choppy terrain baby-soft with a 140mm 36 Float Factory fork and DPS Factory shock. As you delve deeper down the trail, you’ll quickly fall in love with the silky XTR drivetrain that’s light, efficient, and shifts effortlessly through a massive 12-gear range, allowing exploration of the steepest, most technical terrain out there. The Hightower’s XTR brakes are a beautiful balance of sleek design, light weight, and all-out power, coupled with Ice Tech rotors for fade-free, endless descents. Your Hightower’s cockpit is outfitted with a carbon handlebar, WTB saddle, and RockShox Reverb stealth dropper that deliver tremendous control in myriad riding scenarios, all with clean lines and lightweight performance.